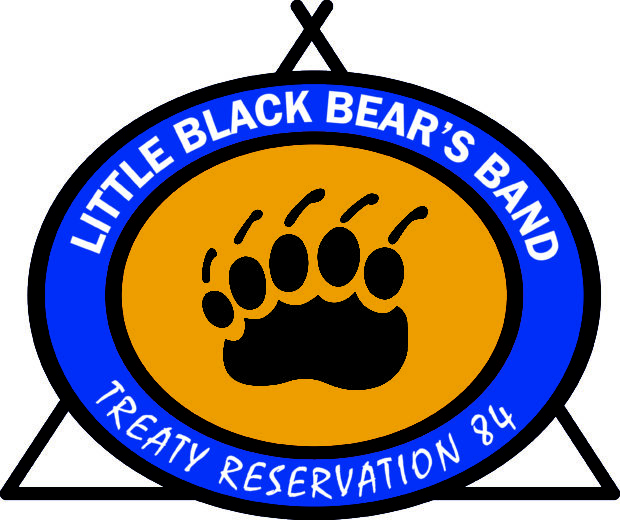 Little Black Bear’s Band’s logo is a combination of symbols and colours which bring together the most important and sacred components of our spirituality. Together the elements of the logo depict the spirit of our people and our relationship to the Creator. It must be noted however, that colours and symbols vary from Nation to Nation, Band to Band, and that this logo was produced to appeal specifically to the members of Little Black Bear’s Band.

The base of the logo represents a TIPI. The tipi symbolizes not only shelter and protection, but also community. Each point of the tipi represents a unit of people in the community. The NORTH POINT of the tipi stands for the CHILDREN, the SOUTH-WEST POINT for the ADULTS, and the SOUTH-EAST POINT for the ELDERS. The CONNECTION of the three points on the tipi also stands for the PASSING ON OF COMMUNITY VALUES FROM ONE GENERATION TO THE NEXT.

Another element of the logo is the CIRCLE. The circle represents the continuity of life, from birth and growth, to leaving and rebirth. The circle has the power to conceive, nurture growth, heal, and connect this world to the next.

The BEAR’S PAW is our most powerful symbol, and is therefore placed in the centre of the logo. It describes the relationship of the Creator and all living things. The bear’s paw represents the direct lineage of the four natural gifts and the four kingdoms to each other and together to the Great Spirit. The bear, the man, and the Great Spirit are one in the bear paw.

Posted On August 27, 2019
For the past 30 years, an annual gathering has taken place in the Qu’Appelle Valley to reconnect, recognize and honor the spirit and intent of…

Posted On November 27, 2019
Little Black Bear's Band's logo is a combination of symbols and colours which bring together the most important and sacred components of our spirituality. Together…